His Majesty the King visits the MYRRHA project

His Majesty the King paid a working visit to the Belgian Nuclear Research Centre today. The visit was initiated by last year’s government’s decision to implement the MYRRHA project in Mol. “This new, unique research infrastructure will attract young and dynamic scientists from all over the world”, says Hamid Aït Abderrahim, SCK CEN Deputy Director-General and MYRRHA project Director. 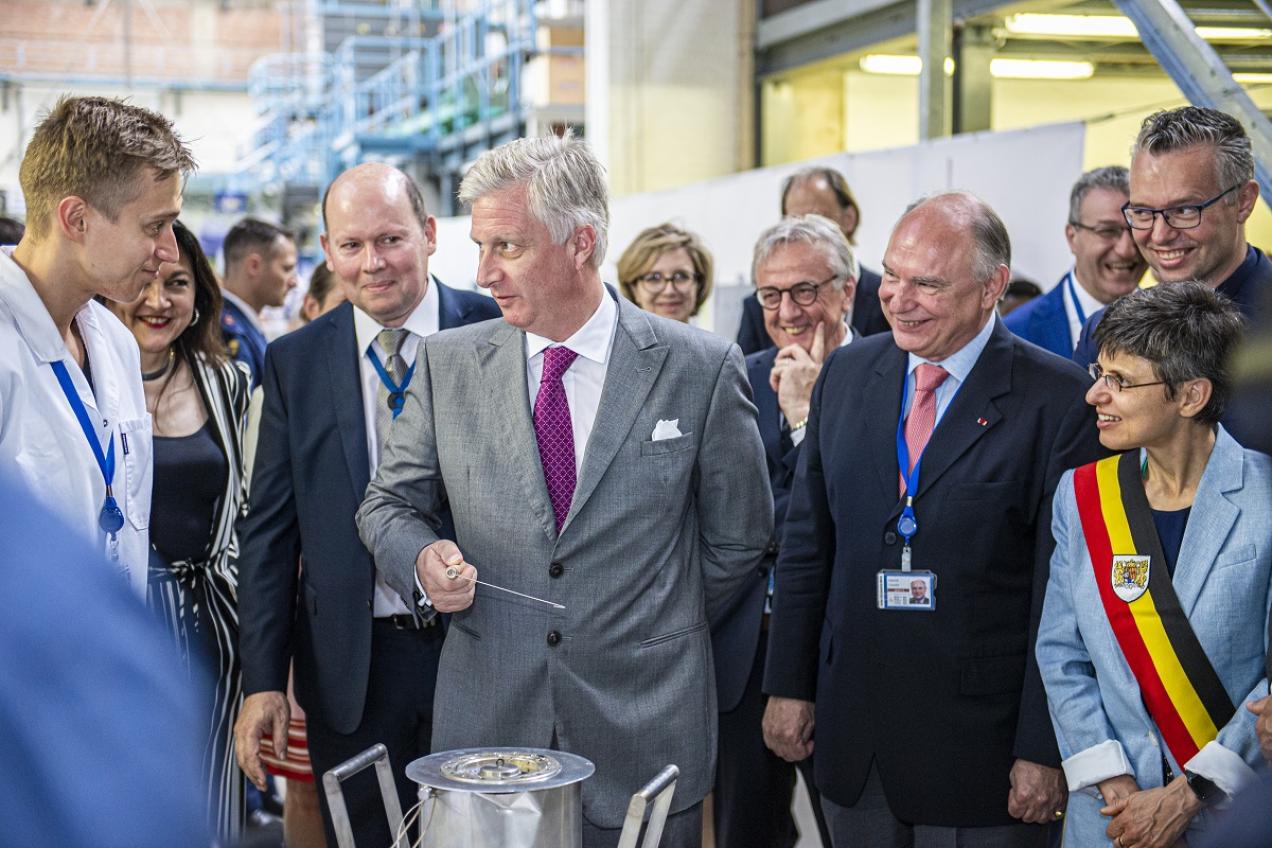 Mol (Belgium), Wednesday 26 June 2019, 10 am. The sun reflects on the silvery aluminium experiments inside the SCK CEN Technology Hall that were developed for the innovative MYRRHA research infrastructure. About fifteen young researchers are moving around a bit tensely. They will be hosting the King, who is about to arrive on a working visit. “One for one, they are passionate scientists”, Hamid Aït Abderrahim, SCK CEN Deputy Director-General and MYRRHA Director says as an introduction. Angélique Gatera (32 years) kicks off and takes the King along a fifteen meter long banner of the MYRRHA accelerator.

“MYRRHA will be the world’s first prototype of an accelerator driven system. The particle accelerator starts and maintains the nuclear reaction inside the reactor. When you switch off the accelerator, the reactor will stop within one millionth of a second. I’m thrilled by the challenge of building the world’s most reliable accelerator”, says Angélique. Engineer Christophe Corazza (27 years) confirms: “MYRRHA enables us to take giant leaps into the future by linking technology with science.”

MYRRHA’s innovative characteristics were the main attraction for Yong-Hoon Shin. “The more I delved into lead bismuth as the cooling liquid during my nuclear studies, the clearer it became to me that I had to end up at MYRRHA. This is the only place in the world where I can put my knowledge into practice”, research engineer Hoon (30 years) points out. “What drives me, is the desire to remove technical barriers on that road. The desire to work alongside colleagues who come from all corners of the planet and to share our experiences”, says François Davin (27 years).

Angélique Gatera, Christophe Corazza, François Davin and Shin Yong-Hoon are no exceptions in the MYRRHA team with their young age. The average of the 135 strong team is 35 years. Hamid Aït Abderrahim explains: “MYRRHA is an ambitious project. It will result in a technological solution to reduce nuclear waste, while it will also produce new medical radioisotopes. These medical radioisotopes will allow us to combat cancer more effectively and to reduce patient side-effects. Shaping the future is clearly creating a new dynamism in the sector. A dynamisms that resonates with many young scientists.”

MYRRHA addresses several societal challenges, but the materials that are used in the project also offer opportunities in other industries. The reactor’s cooling liquid could contribute significantly to sustainable energy. “With thermal solar energy, we no longer work with the sun’s light, but with its heat. We do this by focussing the light into a container with a heat absorbing liquid. That allows us to store the energy. Lead bismuth conducts heat and is thus an ideal candidate for this application,” Hamid explains.

MYRRHA’s construction made significant progress since the Belgian government’s decision of 7 September 2018. The King was able to witness this progress at first hand during his working visit to the SCK CEN in Mol today. “MINERVA, the project’s first phase, is under full development. The installation should become operational in 2027. That will see the production start of our innovative medical radioisotopes,” says Marc Schyns, Director of the Advanced Nuclear Systems Institute. MINERVA will eventually be built at the Mol site, but its construction will be done in several steps. Key components were initially tested in Grenoble and taken to Belgium, where they were reassembled at the Cyclotron Resource Centre at Louvain-la-Neuve (UCLouvain). “The MINERVA accelerator will eventually produce protons at 100 MeV, but the installation at Louvain-la-Neuve will be restricted to 5.9 MeV.”

The King was welcomed by Derrick Gosselin (Chairman of the SCK CEN Board of Directors) and Eric van Walle (SCK CEN Director-General), in the presence of ministers Kris Peeters and Marie Christine Marghem, Antwerp province governor Cathy Berx and Mol Mayor Wim Caeyers. 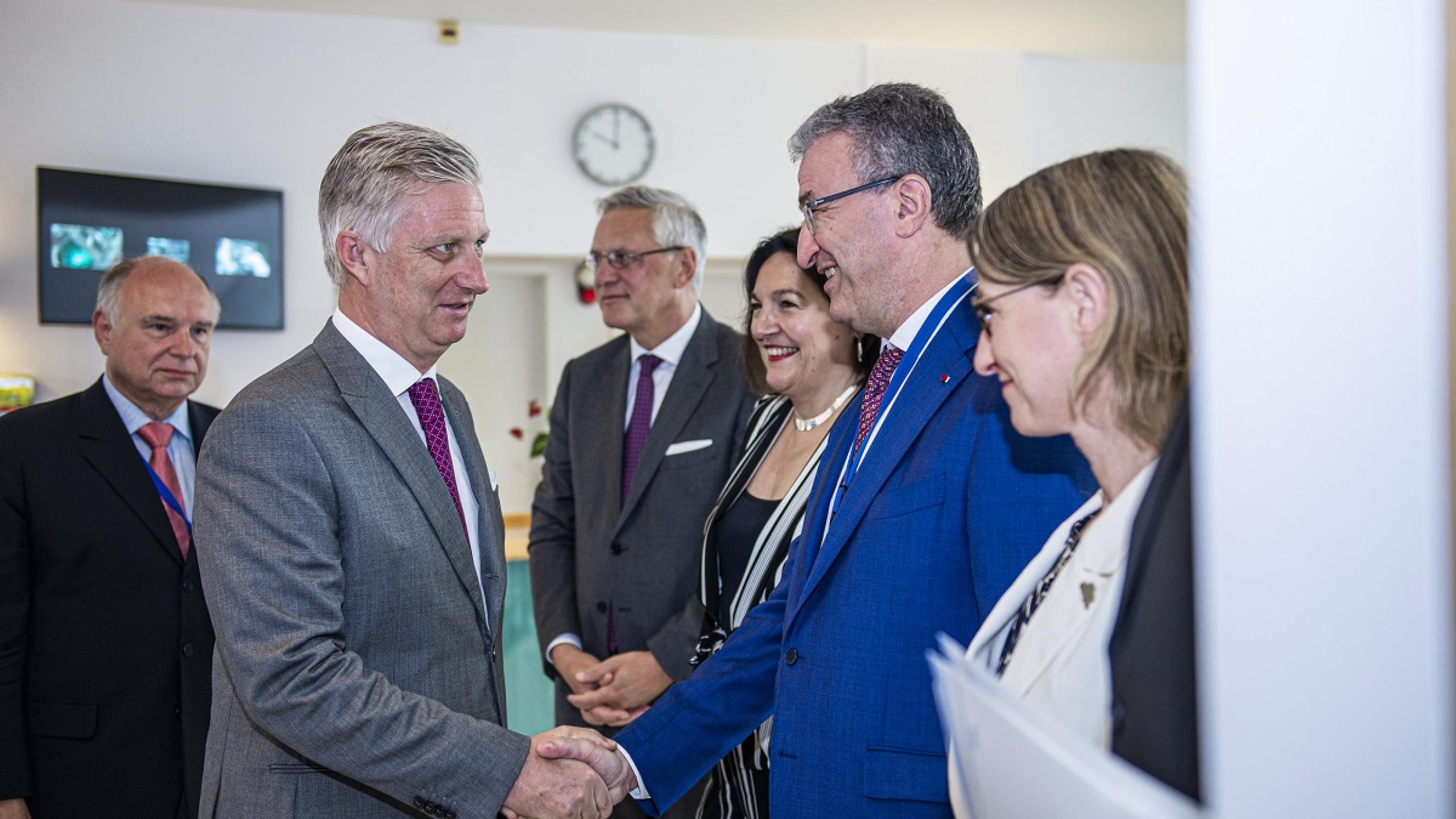 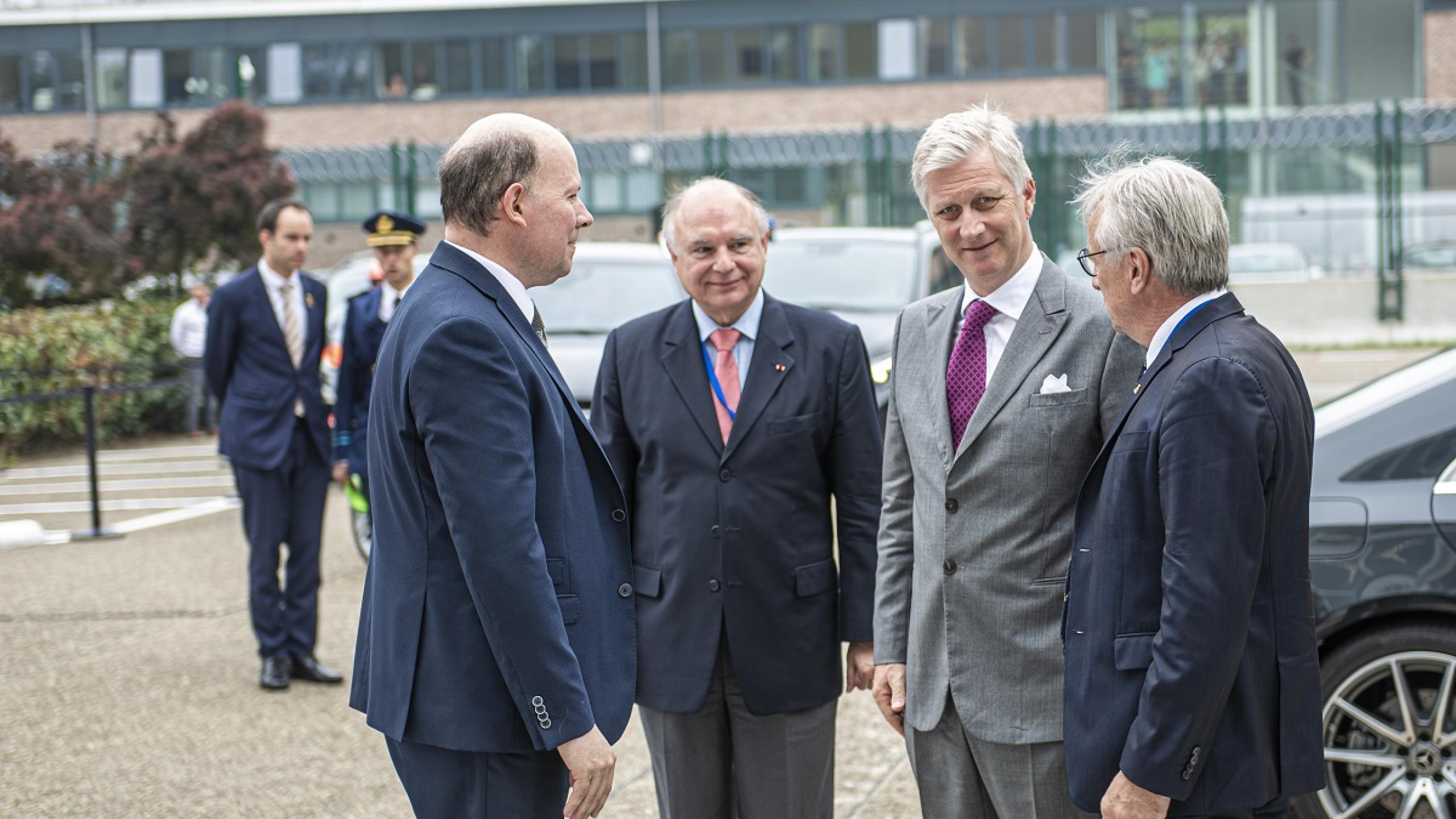 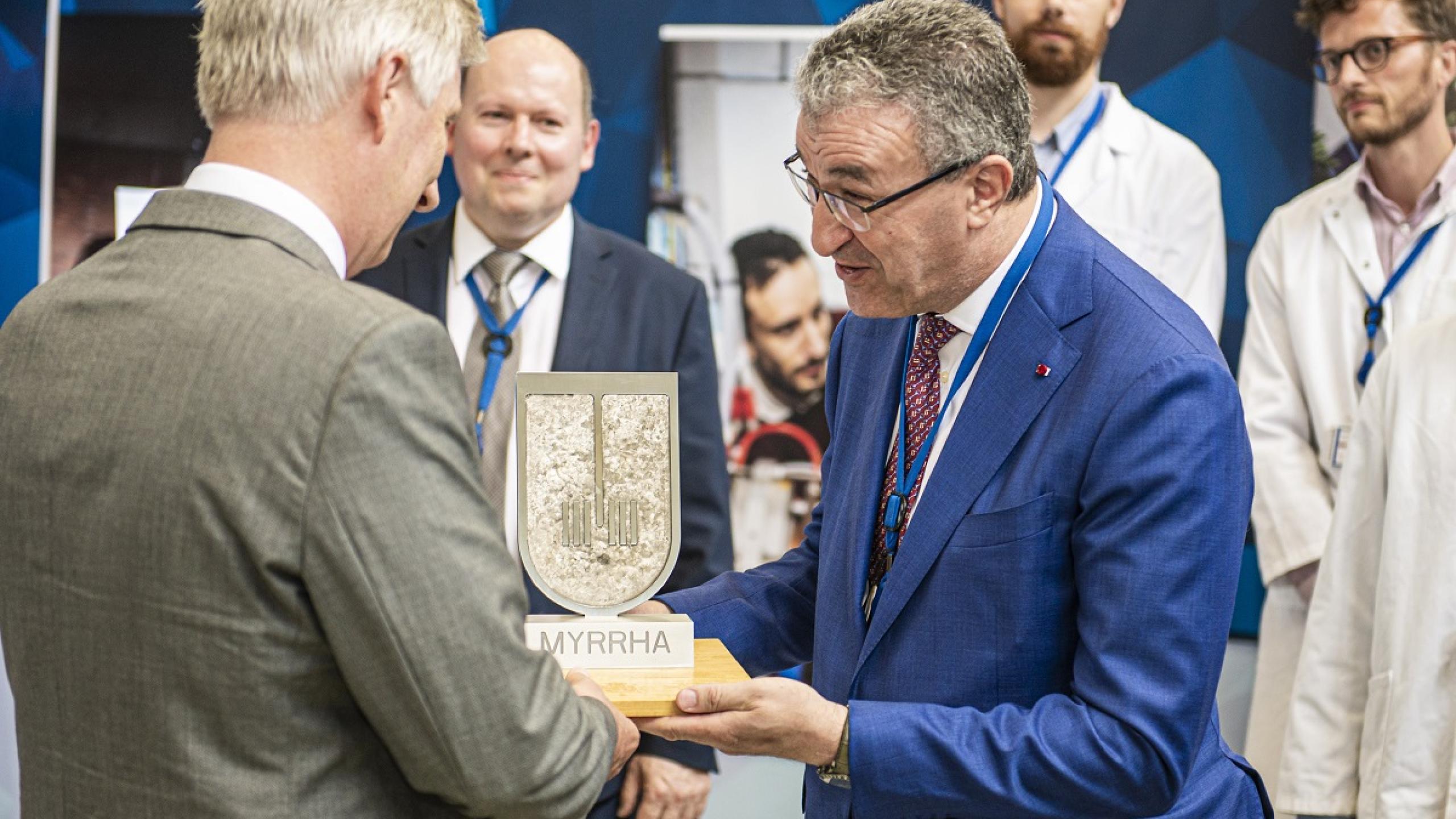 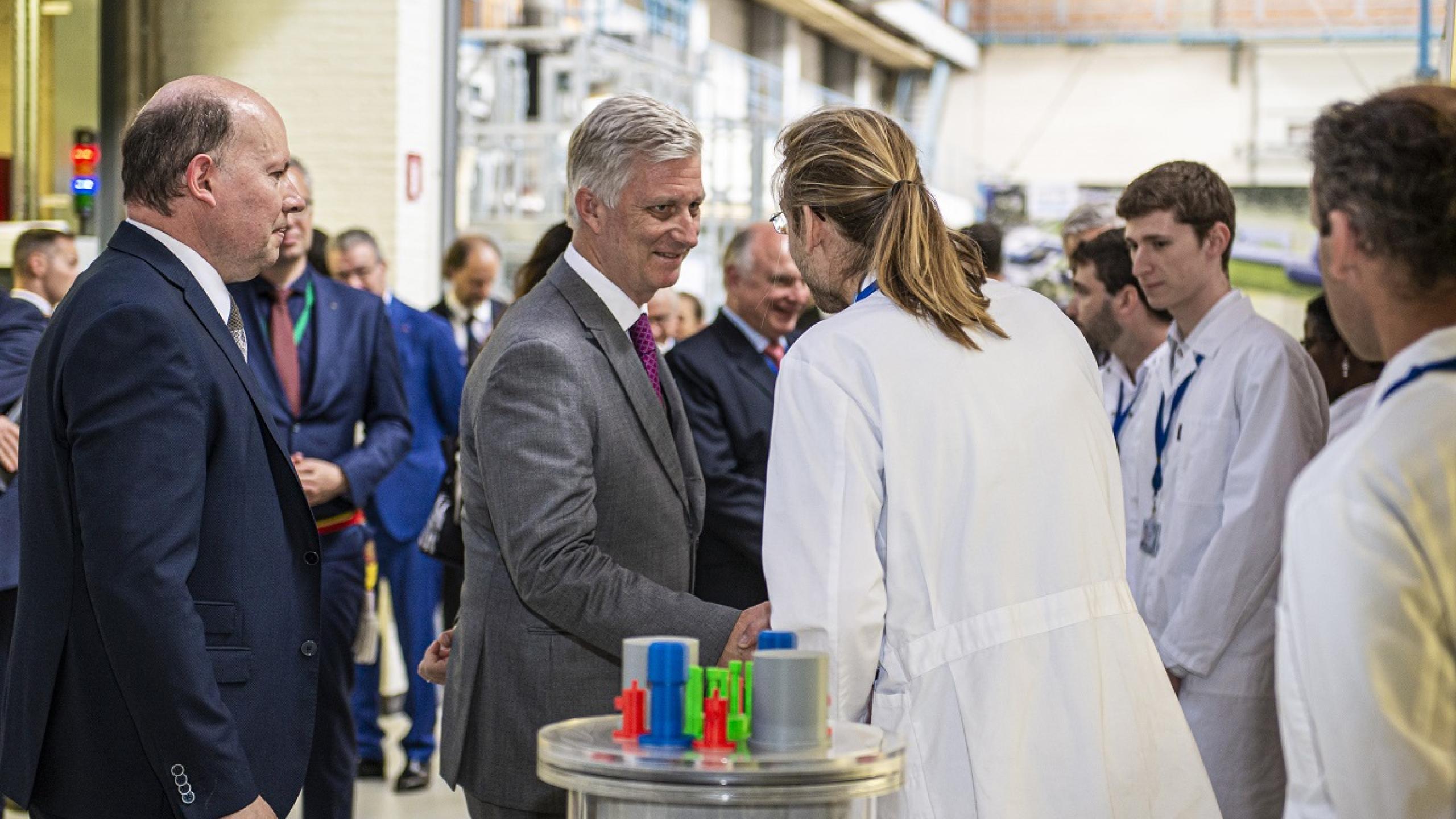